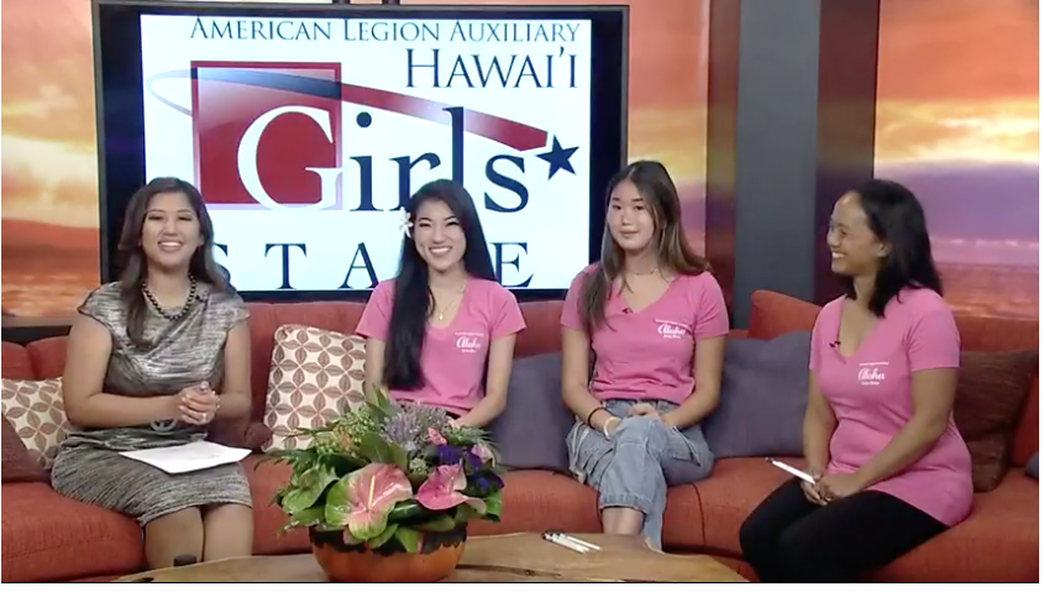 By Grace Lee | March 27, 2019 at 10:23 AM HST - Updated March 27 at 10:23 AM HONOLULU (HawaiiNewsNow) -
“ALA Hawaii Girls State” is a leadership program for high school girls
​
State Representative Della Au Belatti, Stephanie Sakamoto, and Amy Yang joined Lacy Deniz on Sunrise to talk about, “A-L-A Hawaii Girls State” -- a leadership program for high school girls.
The program is seeking girls that are juniors in high school to apply to the program; ALA marquee Youth Leadership, Civics Engagement program that is held each year in June, this year it will be on June 9-11, 2019. ALL juniors from across the state encouraged to apply.
The 74-year-old program, ALA HAWAII Girls State, is currently ​seeking females that are juniors in high school to apply for the limited spots for this extremely prestigious youth leadership program. Students will learn first hand the significance and practical application of a civics education through leadership development and consensus building.
While many that grew up in Hawai’i might not be familiar with this program, ​due to the fact that it was on a 32-year hiatus​, ​this is a highly regarded youth leadership program that colleges, universities, military schools, and jobs regard with extremely high regard. ​It empowers Hawai’i’s youth to find their voices for government advocacy.
Hawai’i will accept about twenty-five girls in 2019. ​ Hawaii is the only state that their girls state has to also raise funding, so, always looking for grants, donations, etc.
For more information: www.HawaiiGirlsState.org or email ​alaHawaiiGirlsState@gmail.com
Copyright 2019 Hawaii News Now. All rights reserved. 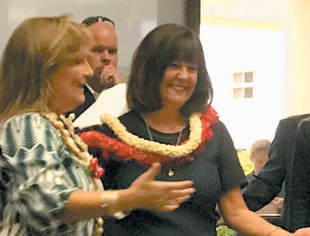 Don Robbins
Editor, Ho’okele
Karen Pence, the wife of Vice President Mike Pence, shared gratitude for military spouses as the keynote speaker at last month’s 2017 Joint Spouses’ Conference, an annual conference for all military spouses held this year at Blaisdell Center Exhibition Hall in Honolulu.
“You’ve had to leave your homes, you’ve had to give up or postpone your personal aspirations, and even change careers. I for one admire your steadfast devotion to your spouses and our nation,” Pence said in her speech.
Each year a different branch of military operates the conference.
This year the Army hosted the event and chairperson of workshops Jodi Peterson invited Pence.
“As military spouses we are in a constant state of giving up things we love, redefining our passions and starting from scratch. Mrs. Pence was an Air Force child, is a Marine mother and has dedicated her life to supporting Mike Pence on his journey,” Peterson said.
“To know our demographic is understood by the executive branch is a breath of fresh air. Having Mrs. Pence travel to Oahu, specifically to honor military spouses was everything. I was honored beyond words that she carved out time to recognize military spouses and our sacrifices,” Peterson added.
Pence participated in some of the conference workshops held this year.
The American Legion Auxiliary (ALA) Aloha Girls State hosted a workshop on “The Living Lei” and presented Pence with an Ali‘i Pikake lei.
“To be able to present the ‘second lead spouse’ of our country with aloha today was a momentous occasion,” said Brister Thomas, the director of the ALA Girls State in Hawaii.
“As a military spouse, we do so much and really do not expect anything in return. However, when someone reaches out, looks you in the eye and says a heartfelt, ‘thank you,’ it truly touches our hearts,” Thomas said. 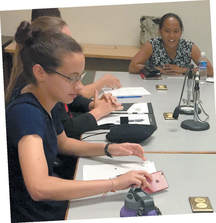 ALA Aloha Girls State delegates meet with Rep. Della Au Belatti, Hawaii’s state House vice speaker, (center) about the issues affecting Hawaii. Photo courtesy of Brister Thomas
​Military teens experience how state, federal government work
​(click title for link to article)
Ho'okele Staff | Aug 25, 2017
Don Robbins
Ho‘okele Editor
Teens from military families in Hawaii are among those who participated in this year’s American Legion Auxiliary of Hawaii (ALA) Aloha Girls State program.
Moanalua High School students Abigal Horan, the newly elected ALA Aloha Girls State governor, and her sister, Felicity Horan, are daughters of military parents.
Felicity Horan and student Sienna Byrne from Hawaii Preparatory Academy on the island of Hawaii also represented the state of Hawaii as senators for the competitive ALA Girls Nation program in Washington, D.C. during the month of July. Byrne was also elected lieutenant governor of ALA Aloha Girls State.
Felicity Horan and Byrne drafted a resolution to promote integration of improved processing of immigrants and presented it on the floor for debate during American Legion Auxiliary (ALA) Girls Nation.
“This past week has given me such a positive attitude towards the future of women in government and leadership positions in general. The other girls there were not only intelligent but very supportive of one another and vastly differing view points,” Byrne said after representing the state in Washington, D.C.
She felt her biggest accomplishment was making a point to participate as much as possible in the senate sessions.
“It was initially scary to get up in front of everyone, but after a week of doing this I am confident in my public speaking abilities,” Byrne said.
Felicity Horan said, “The week at Girls Nation was amazing because I had the opportunity to meet 98 other girls from every state who shared the same passions and patriotism towards our country.”
“From this opportunity I learned why it is so important for women to prove that they can participate in government and that they shouldn’t be afraid to stand up for what they believe is right, even if they are the minority.”
Horan said she felt that her biggest accomplishment was definitely to run for an elected position.
“At first I was scared because I didn’t feel qualified enough, and almost didn’t run. But when I heard my name as the party secretary for my party, I was so excited and glad that I chose to run. Also, the other girls in my party were so supportive of my decision and election,” Horan said. Felicity Horan is the daughter of retired Col. David Horan and Belgica Horan.
“The two girls that went to D.C. accomplished huge feats! I am still in awe that they had such powerful roles at national,” said Brister Thomas, the program’s director.
“ALA Aloha Girls States elected two high school juniors to represent the state at ALA Girls Nation in Washington, D.C. They toured our nation’s highlights, got to meet President Trump and participated in a ceremony at Arlington Cemetery by the Tomb of the Unknown Soldier,” Thomas said.
The ALA Aloha Girls State and Girls Nation program is focused on nonpartisan political learning experience for select female students who have just completed their junior year in high school.
Every spring, across the United States, every state selects students to convene in a hands-on, educational opportunity designed to instruct tomorrow’s leaders in the privileges and duties of responsible citizenship.
ALA Aloha Girls State delegates gather for a mock government experience to learn parliamentary procedure, campaign, hold rallies, debate and ultimately vote to elect city, county and state officials.
This year’s program included speakers from the government and private sectors and included a full schedule for the delegates, learning firsthand how the state of Hawaii government operates.
Delegates met with Rep. Della Au Belatti, Hawaii’s state House vice speaker about the issues affecting Hawaii today.
“It is nice to see a time where young women feel they can have a voice to be heard. Women do not see themselves as electable and we need to work together to recruit women. Be students of history and continue the ALA Girls State. It is a great opportunity to learn leadership and practice your skills,” Au Belatti said to the high school students.
In addition, Jaime Hearther, a delegate the 2017 ALA Aloha Girls State, was awarded the Samsung State Scholarship. Hearther, a military family member, was selected due to her dedication to community service and scholastic performance.
She now moves on to the national competition and will vie for the $10,000 award. “Her positive energy and incredibly dedication to her fellow delegates placed her well among the top in the state for this prestigious award. We are very proud of her,” said Haylie Culp, program chairman.
The American Legion Auxiliary (ALA) is the world’s largest women’s patriotic service organization, Thomas said. For nearly a century, the American Legion Auxiliary has been serving, helping, and meeting the needs of the nation’s veterans, military, and their families, both here and abroad. 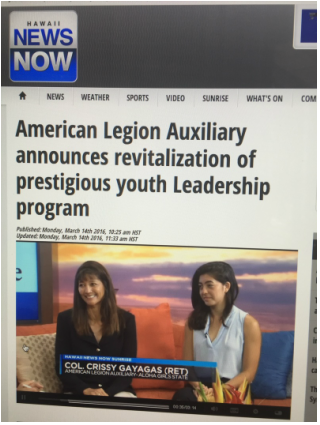 Hawaii News Now (click here for video)
HONOLULU (HawaiiNewsNow) March 14, 2016-In an era where social media and cable news shapes so much political opinion, the need for basic citizenship education is more prevalent than ever.  The American Legion Auxiliary is pleased to announce the revitalization of the prestigious Youth Leadership program: ALA- Aloha Girls State program, where students will learn first hand the significance and practical application of a civics education.
The ALA-Girls State Program is a nonpartisan political learning experience for female students who have just completed their junior year in high school.  Every spring across the United States, each state carefully selects students to convene in a hands-on, leadership, educational opportunity designed to instruct tomorrow’s leaders in the privileges and duties of responsible citizenship.  Delegates will gather for a mock Hawaiian state government experience to learn parliamentary procedure, campaign, hold rallies, debate and ultimately vote to elect political officials. There is also a potential for college credit for participants. At the conclusion of each state’s program, two delegates are selected to represent Hawai’i at ALA-Girls Nation in Washington, DC where most years include a trip to the White House to meet the President of the United States.
For additional information, please contact:  Brister Thomas (808) 284-0293, alaAlohagirlsstate@gmail.com or go to our Facebook page or website: http://www.alaalohagirlsstate.org/.
Copyright 2016.  Hawaii News Now.  All Rights Reserved.