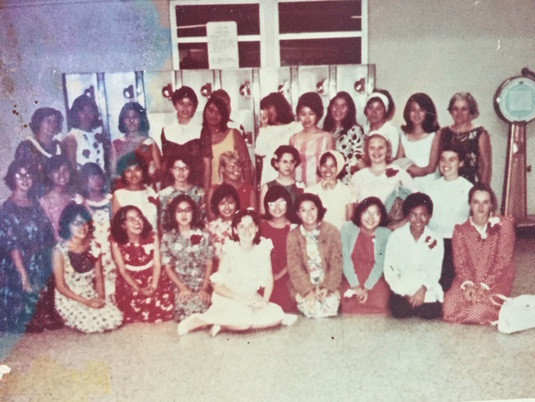 American Legion Auxiliary | Department of Hawaii
The ALA Department of Hawaii is a proud supporter of the ALA Hawai'i Girls State program.  ALA Hawai'i Girls State recruits applicants from all high schools in the state and selects young women who are just completing their Junior year (with at least one more semester to complete before graduation) to attend the summer session.

Mission
To provide an outstanding, unique and coveted educational opportunity for the young women of Hawai'i that instills the basic ideals and principles of American government, leadership, consensus building and civic responsibility rooted in service.

ALA's Girls State Overview
Girls State is a leadership program of the American Legion Auxiliary designed to increase awareness and knowledge of governmental processes while learning about the duties, privileges, rights and responsibilities of citizenship. Delegates come away with a greater appreciation of the American Flag and of the sacrifices made by our veterans. While at Girls State, they make friends with outstanding girls from around the state and have a fun week they’ll remember for the rest of their lives. ALA Hawai'i Girls State is a program offered by the American Legion Auxiliary (ALA) Department of Hawaii Hawai'i Girls State Committee.

The Auxiliary, organized in 1919 to assist the American Legion, is much more than the name implies. The organization has achieved its own unique identity while working side-by-side with the veterans who belong to The American Legion. Like the Legion, the Auxiliary's interests have broadened to encompass our entire community.

The American Legion Auxiliary is the world's largest women's patriotic service organization. Through its nearly 10,500 Units located in every state and some foreign countries, the Auxiliary embodies the spirit of America that has prevailed through war and peace. Along with the American Legion, it solidly stands behind America and her ideals.

With the rise in costs during the 1970's and 1980's, the location changed several times including University of Hawaii, Hawaii Loa, and many other gracious hosts.  During this time the fee climbed to $50 per girl and attendance grew from 21 to 29 girls in attendance each year.

We are excited to reintroduce this prestigious program to our students and future leaders in Hawai'i.

With deepest appreciation we wish to thank and recognize the accomplishments of the American Legion Auxiliary, Department of Hawai'i.

ALA Girls Nation History
Back in the depression ridden days of the early 1930s, The American Legion grew concerned over public statements to the effect that Democracy was on the skids.  How, it wondered, could America train its young people in the process of self-government.  Deciding that the best way to learn something was by practicing it, American Legionnaires began, in 1935, to gather teenage representatives from high schools for a few days each summer in a citizenship training program on the processes of city and state government.  They called it Boys State.

As this program succeeded and spread throughout the United States, the American Legion Auxiliary began providing similar opportunities for girls of high school age.  Thus, Girls State was founded.  The first Girls State was conducted in 1938 and since 1948 has been a regular part of the Auxiliary's better citizenship programs.  By 1980, Girls State sessions were held in all 50 states, until the next year when Hawaii was unable to participate.

ALA Girls Nation, the youth citizenship program in the processes of federal government to which Girls States send two senators each, is an annual climax to the Girls State program and has been held in the Nations' Capital for one week each summer since 1947.

The Primary purpose of the Girls State Foundation is to support and promote the
American Legion Auxiliary's Aloha Girls State program and its alumnae.
If you are an alumnae from Hawaii's original Girls State,
​or another state we welcome you to join our foundation!